Rosy starling and catching up..

After a few very busy weeks, I finally have time to write a blogpost again. I was very busy with fieldwork in evenings and nights, so it probably isn't surprising that most of the recordings made are from evening/night active species.
A few weeks ago, on a normal afternoon, I was monitoring House Sparrows in Pijnacker between greenhouses when I suddenly realised I just heard a Wood Warbler (Phylloscopus sibilatrix). A complete strange location for a breeding bird, so it had to be a migratory one. With the realisation that it should be a rarity in this area, I made a (poor) recording for proof. It turned out to be one of the few observations in the muncipality, lucky me..

On the 9th of May we were supposed to meet for the last preparations for the big day. Together with a housemate we have done shopping and were already cooking. I almost died of hunger, but when a Red-throated Pipit (Anthus cervinus) was discovered only 5 minutes from my house, we (Big Day team) immediately ran away, leaving my housemate shocked with half cooked diner. She finally saw how a twitch happened and how I 'suddenly' overcame my hunger :).
It was windy and the bird sat far away. Sheltered by a car, I made a recording of the flushed bird which called only once. The joy of the local birders and sheep is clearly audible ;)

Another adventure in the evening and night at the military area last Tuesday. In my first round in the evening, there were about 30 Common Swifts (Apus apus) swirling around a building. Adults were screaming from out of their nests, a wonderful sound and typical for those warm evenings. Maybe that's why I love them?

The same evening, although a couple hours later, a few juveniles of Long-eared Owls (Asio otus) were bothering their parents with calls for food. A total of eight juveniles were calling, I think it should be from two nests. Will the parents notice the difference between theirs and others kids? How to feed them all! Note the variation between calls:

I almost catched up with my recordings. Yesterday, supposed to be a relaxing afternoon with a picknick, changed into an afternoon birdwatching as an adult Rosy Starling (Pastor roseus) was discovered near Hilversum. We haven't had that much records of adults and for many, including me, it was the first time. I just installed myself with my recording gear (in case of) and sat in a sheltered position when I saw the bill opening and closing through my telescope. I recorded it and only after a while (after my recording), other observers noticed that the bird was singing. Me and another recordist approached the bird to capture a beter recording, but the bird flew away (not because us). It never sang again! Another first for Waarneming.nl and only the fifth for Xeno Canto! The bird was on quite a distance and sang very softly, so I appologize for the noise, but you can hear it clearly. Quite different from Common Starlings isn't it?

Later in the afternoon we went for a Common Rosefinch (Carpodacus erythrinus), but because of the wind, I couldn't get more than a record 'shot'. I indeed was 'pleased-to-meet-you'.

Pieter Doorn and Alwin Borhem are busy for a big year and they really are on a good schedule and very close to each other. In the evening, we had diner for 5 and went for Common Nightjar (Caprimulgus europaeus). I failed to record the awesome sounds of Nightjars ('tjoek tjoek' and the stuttering end of the song), but I managed to make a decent recording of the normal song.

In the near future I will write a blogpost of different calls of Reed Warblers and Tawny Owls :)
Posted by Thijs Fijen at 16:35 2 comments:

This blogpost I will leach on recording of others (many thanks for that!), but I think it will be worthwile when you want to learn something about the difference between the two species of nightingales, using the thriller. For several days, Tim van Oerle heard a Nightingale singing near Zevenaar. He made a recording because is was not sure of which species it was. It had an 'thriller' and as most of you will know, this is typical for Thrush Nightingale (Luscinia luscinia). He still had doubts, because the song was rather quick. The recording can be found here:

My first impression was Common Nightingale (Luscinia megarhynchos), however: why? It indeed had a thriller. So I decided to dive into the matters of nightingales. I looked for several recordings on www.xeno-canto.org for both species. I found these two very useful. The first one was of a Common Nightingale in the Germany, recorded by Claus Fisher:

And this recording of a Thrush Nightingale of Jarek Matusiak:

To look for the difference in structure between the rattles, I composed an audiofile with all three rattles and made a picture of it. The structure is quite different: 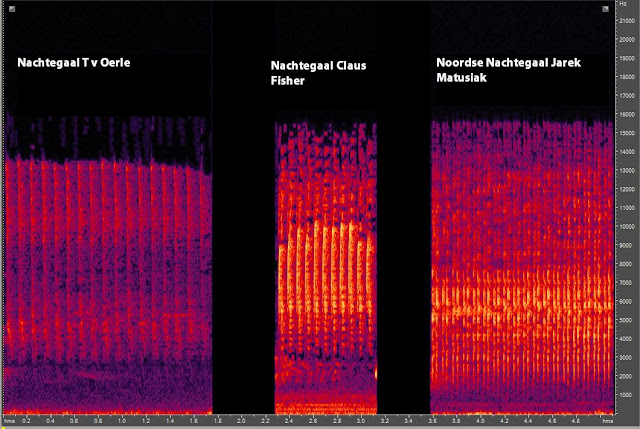 Sorry it's in Dutch, but from left to right: nightingale spec, Common Nightingale and Thrush Nightingale.

Conclusion, it has to be a Common Nightingale, but at least I've learned something! If someone has any comments on this, please give them!

A long recording with 4 trillers.


A recording with 1 triller. And here the corresponding sonogram:

And a recording of 1 trill which was slightly different from the other ones. I only heard it once. And also its corresponding sonogram:

Awesome birds, and I am really happy that I saw and heard the bird. To bad it didn't call, but now we could use the referred article in practice ;)