When I was listening to recordings of Melodious Warblers (Hippolais polyglotta) in the Netherlands last week, I realised I didn't really knew handy tricks to distinguish it from Icterine (Hippolais icterina) and (especially) Marsh Warbler (Acrocephalus palustris) on sound only. Yesterday I received the question whether one recording showed a Marsh or a Melodious Warbler. So I dived into the matter. Listened to many recordings on Xeno-Canto.org, noted my thoughts on songs and tried to describe the differences between them. With the risk of making 'mistakes', here my notes (I'm not affraid to make mistakes, so please give comments!):

Here a recording of Sander Bot on XC. Note the mechanical sound, 'tick' notes and the upbeat pace:


Melodious Warbler:
Clear imitations with clear tones. Imitations often have a longer timespan than in Marsh Warblers. Starts often with 'tretretretretre' or 'tr tr tr tr tr' and then the 'real' song. Pace still quit fast, but because of the clear tones it sounds rather melodious (could that explain the name? ;-) ). Sounds a bit like Blackcap and/or Whitethroat.

As example a recording of Jordy Calvet on XC:


Icterine Warbler:
Very typical for Icterine are the nasal tones which can resemble toys (the type you give to your dog or for in bath). Pace is more relaxed than in Melodious and Marsh.


An example from Icterine by Patrik Åberg (a recordist with many good recordings!). Note the quite awesome imitation of Rosefinch (around 45 seconds) and ofcourse the bath ducks:

As said: please give comments if you feel like I am on the wrong end or if you have additions!

And as a bonus a picture of Melodious Warbler made by Toy Janssen, the guy that learned me watching birds. Visit his site for more pictures during his/our adventures (www.globalbirding.com) 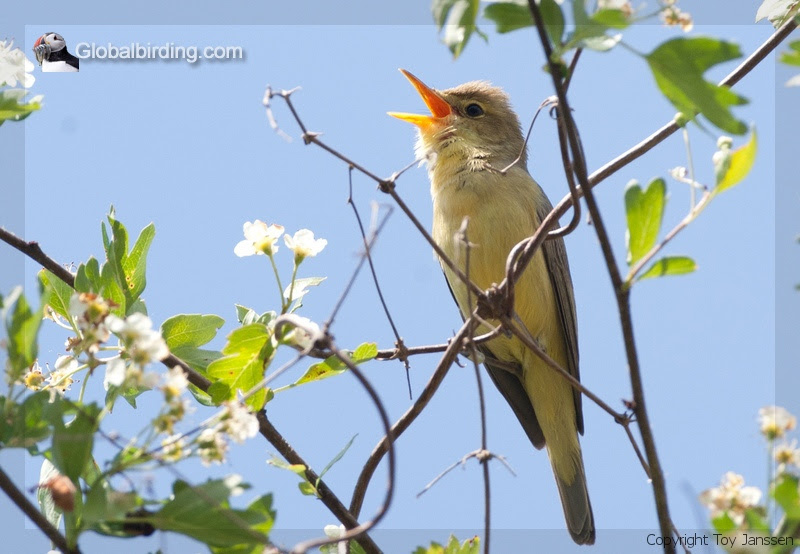