Before I really start, thanks for all the comments on the last blog post on Marsh, Melodious and Icterine Warbler. As a result these notes: be aware of 'slow' Marsh Warblers as they can resemble Melodious quite good and be aware that Melodious can have tick's as well. The recording I made yesterday from a Melodious Warbler in the Netherlands shows ticks, but really is a Melodious (plumage, rest of song). Note that the ticks sound different and are really part of the imitation.


Yesterday (Saturday 2th of June) Toy and me were bird watching with our main goal: moth ticks. As there is an Iceland Gull in Westkapelle, we had to go there. It's a MEGA for June :D. We first 'did' a Common Merganser, dipped the Bufflehead, scored Red Knot (shame on me), ticked Arctic Tern for the year list (more later), hit-and-run for the European Shag and straight to the Iceland Gull. We found out that there was still a Whooper Swan in 't Vroon and ticked it. Ah well, I ticked 10 species for my month list :D


More about the Arctic Tern (Sterna paradisaea). We were driving along the Flauwers Inlaag (near Zierikzee) with our windows open, when I heard Arctic Terns. You might think 'heard'? I know it as the day of yesterday. It was on Texel on the second of May 2009, a beautiful day, perfect birding weather. No, bulls#@#. At least some of it. It was that day that I noticed a different call in the tern-colony. Looked where the sound was coming from and it turned out to be an Arctic Tern. Since that day I am able to identify Arctic Terns by their call. As with my last blogpost, I was thinking about how to describe the differences in calls. To me, Arctic Terns always sound higher pitched and sharper than Common Tern, more 'kie' than 'kah'  and more 'krieeee' than 'kieerâh'. I made sonograms of the different calls and compared them to Common Terns.

The comparison in structure: 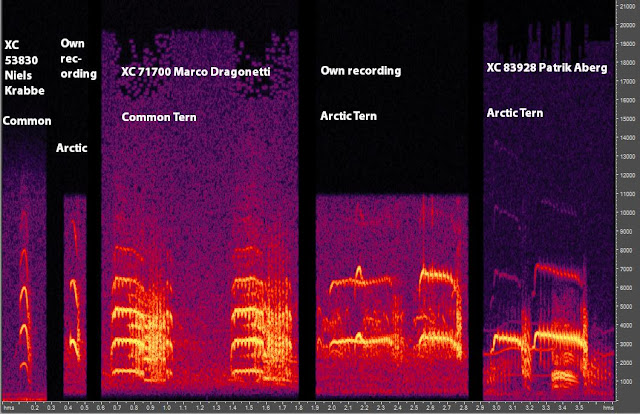 It sounds like Arctic Terns are higher pitched, however they are not really higher pitched. Common Terns show more harmonics (including fundamental: 5-6 in Common vs 3-5 in Arctic) as well above as below the fundamental tones and it is because of the lower harmonics that the total sound, sounds lower in Common Tern. This is the case for both types of calls!

Then the difference in structure of the 'kie'/'kah'-calls: Common Terns first go up, then down. Arctic Terns go almost straight and then down (it is not that clearly in the sonogram, but if you look at Xeno-Canto.org you see more examples).

The structure in the 'krieee'-calls is more difficult. Yes it is higher pitched, with less harmonics. But it doesn't really differ in structure. Common Tern, on general, gives a longer deep throated 'âah' at the end. Weird description, hard to understand if you only see it, so please give it a listen!

My recording of the Arctic Terns (another first for Waarneming.nl :-) )